In the past, releases were revoked or suspended because Del Balso’s friend was killed and because a gunman had stormed into his home. 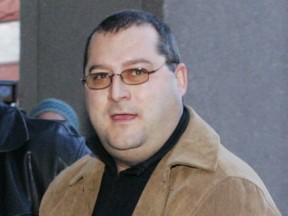 Francesco Del Balso is still serving the 11-year sentence he was given in October 2008, after he pleaded guilty to cocaine smuggling and a gangsterism charge. Photo by Marcos Townsend /Montreal Gazette

Alleged Montreal Mafia leader Francesco “Chit” Del Balso has been granted yet another conditional release on the lengthy sentence he is serving, despite having admitted only a month ago that he threatened a reporter.

Despite having violated his conditions in the past, the statutory release is the now the fifth Del Balso, 48, has received. He is still serving the 11-year sentence he was given in October 2008, after he pleaded guilty to cocaine smuggling and a gangsterism charge related to how he acted as a leader in the Rizzuto organization between 2002 and 2006.

Almost all offenders in federal penitentiaries who have not previously been granted parole automatically qualify for a statutory release after they reach the two-thirds mark of their sentence. Previously, Del Balso’s releases have been revoked or suspended, but in at least two cases they were because of reasons beyond his control.

In March 2016, his release was revoked out of concerns for his safety, after his close friend (and fellow leader in the Rizzuto organization) was fatally shot in Laval. The following year, another release was revoked because of how Del Balso reacted when someone stormed into his home, pointed a gun at his wife and son and demanded to know where he was. Del Balso wasn’t home at the time, but one of his sons warned him about the home invasion. Del Balso tore off the GPS bracelet he was required to wear at the time and hid for hours while police tried to contact him.

Del Balso’s last release was suspended in December after he was arrested for threatening the life of Félix Séguin, a TVA reporter. Séguin had reported a story alleging that Del Balso was extorting protection money from restaurant owners in Quebec City. Del Balso was upset over how the report included details on where he lived. He asked police and a prosecutor to have a peace bond imposed on Séguin. According to a written summary of the decision made by the Parole Board of Canada this week, Del Balso felt the police treated his request as a joke and he became upset when the prosecutor turned him down.

“Am I going to have to make arrangements for (Séguin) to end up in a box?” the prosecutor quoted Del Balso as having asked during their meeting. The comment led to Del Balso being charged with threatening the reporter through a third party. His statutory release was suspended on the same day he uttered the comment. Del Balso pleaded guilty to the charge in December and was sentenced to a 30-day prison term.

“Regarding the circumstances having led to your suspension, you indicated at the hearing (before the parole board on Wednesday), that indeed, you did not manage your emotions adequately and that you take responsibility for making threats to the journalist,” the author of the written summary of the parole board’s decision noted. “You stated that you experienced an overflow of emotions that had been building since you had to leave your place of residence and you regret your actions.”

Del Balso told the parole board he was upset because he felt forced to leave his home after the report was aired on TVA and published in the Journal de Montréal. He said he lived in hotels for a month after the story aired. The summary also notes that the police “investigation at the time did not indicate that you were linked to extortion activities in restaurants in (Quebec) City. Police had no indication that you had resumed criminal activities.”

In 2017, Del Balso told the parole board that he is done with organized crime.

As it has done in the past, the board attached a series of conditions to Del Balso’s release. That includes a condition forbidding him from communicating “directly or indirectly” with Séguin.