The man who killed Rocco Sollecito became an informant for the Sûreté du Québec in 2019 and is testifying in the trial of Jonathan Massari, who is accused of having a role in four murders. 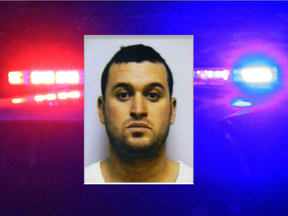 Jonathan Massari is accused of taking part in four killings linked to a conflict within the Montreal Mafia. Photo: Court files

A man who was once asked to protect Jonathan Massari found himself testifying Tuesday as a witness for the prosecution in the trial in which Massari is accused of having a role in four murders carried out within the context of a Mafia conflict.

Massari, 41, is on trial at the Gouin courthouse in northern Montreal. He is charged with the first-degree murders of Lorenzo Giordano and Rocco Sollecito, leaders of the Sicilian part of the Montreal Mafia, as well as the murders of brothers Giuseppe and Vincenzo Falduto. All four were killed in 2016. When the trial began in September, the prosecution said all of the victims were killed as part of a “war of clans” within the Montreal Mafia.

Massari is alleged to have acted as a middleman between brothers Andrea and Salvatore Scoppa, two leaders of a Calabrian clan, and those who were willing to carry out their orders to kill many people tied to the Sicilian clan during 2016. 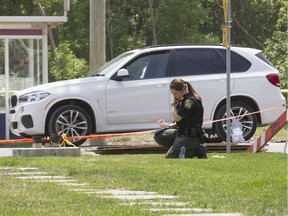 A Laval police officer takes notes at the scene where Rocco Sollecito was shot on May 27, 2016. Photo by Phil Carpenter /Montreal Gazette

The man who actually killed Sollecito and the Falduto brothers became an informant for the Sûreté du Québec in 2019. He began testifying in Massari’s trial Tuesday morning.

The informant, whose name cannot be published, told the jury he first met Massari at the Cowansville Institution, a federal penitentiary in the Eastern Townships, around 2013.

“One of my friends mandated me to protect Massari. (It was) Piero Arena, who is dead now — he asked me to render a service for him,” the informant said. “Jonathan Massari had problems behind the walls (inside Cowansville).

The informant named Arsène (BM) Mompoint, “a man who is now dead,” as one of the underworld figures who wanted to harm Massari.

“There were other people from street gangs who wanted to get him,” the informant said, adding he and Massari were eventually released on parole and began hanging out together in 2016. He said Massari introduced him into a group of men led by Salvatore Scoppa, who maintained a list of people the Calabrians wanted to have killed.

One of the first people on that list was Giordano. The informant said he did not participate in that homicide, but that Massari told him an accomplice named Dominico Scarfo was the gunman who killed Giordano, on March 1, 2016, while Massari acted as the getaway driver.

The informant also testified about how he personally shot Sollecito, in Laval on May 27, 2016, before jumping on the back of a motorcycle driven by Massari.

The informant told the jury that, as part of a plan, he waited on a bench at a bus stop on a road Sollecito used when he left his home. Scarfo was in a vehicle in front of Sollecito’s, the informant said, and forced their target to make a complete stop at the intersection where the bus stop was located.

When Sollecito’s sport utility vehicle came to a complete stop, “I looked him in the eye and then I got up,” the informant said, adding the first bullet he fired broke the front passenger window of Sollecito’s vehicle.

“I didn’t hesitate. I emptied the loading clip,” the informant said. “I emptied it into his body.”

He said Massari was waiting nearby on the motorcycle and they sped off after he hopped on.

The informant told the jury he was also the gunman who killed the Falduto brothers, on June 30, 2016, on a farm in St-Jude, a rural town near St-Hyacinthe.

“(Massari) said (the brothers) wanted to kill me to get to Massari and Sal Scoppa. That is why Massari asked me to do it,” the informant said. “That was his story, but I didn’t believe it.

“The brothers, Vinny and Joey, I didn’t want to do them at all — not at all. I saw nothing negative in them at all.”

The prosecution witness also said Massari was supposed to kill at least one of the brothers in order to become Salvatore Scoppa’s capo, a rank within the Mafia.

On the day the brothers were killed, the informant said, Massari backed out when the ambush began inside a garage on the farm. He said Scoppa wanted Massari to kill at least one of the brothers “to make his bones” in order to become a capo.

“He got scared. He didn’t want to do it,” the informant said, adding he shot Vincenzo Falduto first and felt he had to kill Giuseppe Falduto as well after Massari backed out. He alleged that Massari helped plan the ambush and helped clean up the crime scene.

After he killed the brothers, the informant said, he soon came to regret what he did and told Massari that he was sure Massari had lied to him.

“I cried. I didn’t know why I had done it,” he said. “It was two innocent people (killed) for nothing. Yes, they were involved in organized crime, but they had done nothing. They weren’t a part of the war. They were collateral damage.”

Canine to be allowed on Montreal metro as of this weekend, with some restrictions