A minimalist masterpiece in Montreal’s Westmount

A person lies on the net that spans the top of the atrium in the Westmount home of Maryse Sauvé and David Gilmour.Adrien Williams

Many couples start a renovation with the rosy idea that they’re building a happily-ever-after love nest. But the fighting that almost always comes with the process – he wants ultraminimal, she wants French country, neither wants to compromise – can turn a dream abode into a pit of tears. According to home-improvement resource Houzz.com, 46 per cent of couples report marital strife during an overhaul, while 12 per cent find the tension bad enough to consider divorce.

Such was the case when Montreal architecture and landscape firm Robitaille Curtis remodelled a dated townhouse in the tony suburb of Westmount. Principal Andrew Curtis expertly converted the worn, 1978 structure – dark and poky rooms, a kitchen that can only be described as sad – into an airy pad specifically tailored for a young couple and their two Great Danes. The design is filled with personal touches, including a retractable steel meshing to keep the dogs out of the kitchen during meal prep but not obstruct views of the newly opened, flowing ground floor.

Sadly, though, as the project was finishing in 2016, so was the marriage. Which is not to say all that effort went to waste. This story has a happy ending, albeit for another couple. 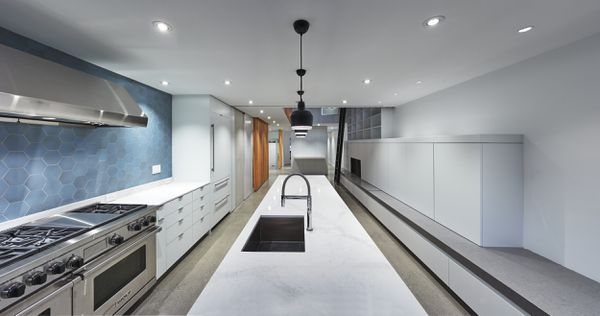 The home has a strikingly minimalist aesthetic that suited its owners perfectly.Marc Kramer

When the home was put up on the market in 2017, Maryse Sauvé was looking for a new place to live. Normally, she and her husband, David Gilmour, would have developed their own custom design. She works in advertising and he’s an entrepreneur, but over the years they’ve shared a side hustle of flipping properties. Together, they’ve built three houses from the ground up and remodelled seven others, living in each place until they sold. Clearly, their marriage can withstand the renovation gauntlet.

After Mr. Gilmour had a stroke, however, at the age of 51 (it was a fluke thing – a faulty valve), they suddenly needed a more permanent residence for resting and recovery. They couldn’t take on the nuisance of more contracting for the foreseeable future, if ever again. They wanted something in a central, walkable neighourhood, with room for their two kids (aged 17 and 21) and two dogs. Stress-free and serene were also requirements. 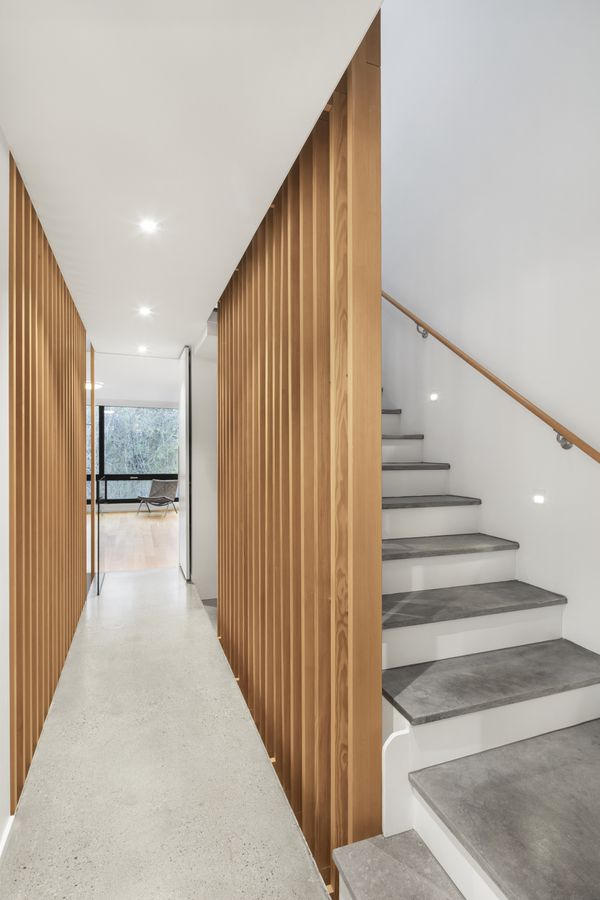 The house has a low-maintenance palette of polished concrete floors, white lacquer millwork and tiles.Adrien Williams

When Ms. Sauvé saw the Robitaille Curtis townhouse, she knew it was for them. The razor-sharp lines and clean, minimal aesthetic matched their mutual tastes. Plus, the base palette of materials – polished concrete floors, white lacquer millwork, lots of tiling – was no-fuss and low-maintenance. “It’s almost like it was built for us without the hassle of doing the build,” Ms. Sauvé says. “When I walked through, I could see the quality of the craft and the attention to detail. I was very impressed.” Ever scoping out potential fix jobs, she adds: “I have rarely – if ever – visited a house in which I would not change anything. And that was the case here.”

One of the biggest draws, though, was the brightness of the interiors. “Every inch gets light,” Ms. Sauvé says. “And the quality of light inside is amazing. It really makes the place incredible livable.”

Achieving that luminosity was a central challenge for Robitaille Curtis. It didn’t help that, as a long, skinny townhouse with party walls, the windows were limited to the front and back and couldn’t be expanded because of townhouse bylaws. Although there was a skylight on top of the three-storey, 260-square-metre space, “the original house was super enclosed by drywall partitions,” Mr. Curtis says. “The proportions of the atrium beneath the skylight were nice. But a lot of the light was blocked by the partitions. It was a real missed opportunity.” 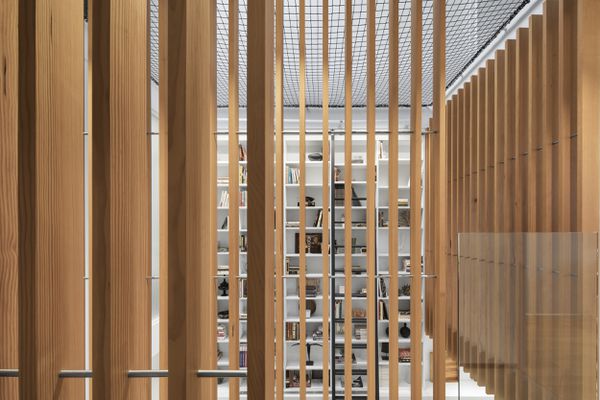 The design, then, became a game of eliminating barriers to light. Instead of multiple rooms on the ground floor, the living and dining rooms and kitchen now all blend together (save for the aforementioned metal scrim, which is as porous as possible, and still does its duty as a dog guard). On the second level, which has the master suite and den, the once opaque partitions are replaced with Douglas fir slats, spaced widely enough to allow views through. “They not only add transparency but warm up the design,” Mr. Curtis says. “They make the space feel more humane.”

The most dramatic barrier take-down was on the third floor, which has two kids rooms and a small sitting area. In order remove any kind obstruction that might cast shadows below, Robitaille Curtis covered the top of the atrium with a net. Engineered by the head rigger for Cirque de Soleil, it lets the sun, not people, fall through. “It’s reinforced by some serious steel beams,” Mr. Curtis says. “The net can hold several thousand pounds.” 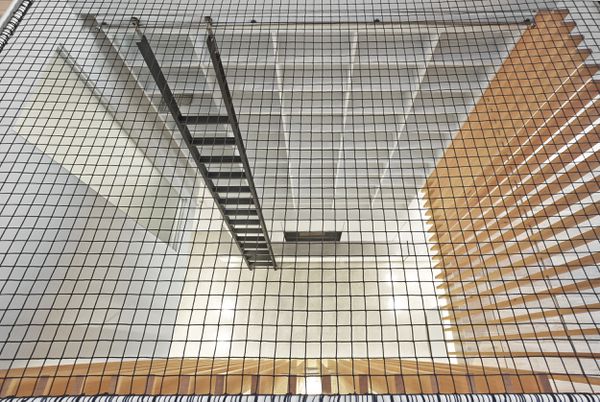 A net engineered by the head rigger for Cirque du Soleil allows natural light to flow to the home’s lower levels.Marc Kramer

The latticework also added appreciated whimsy to the difficult circumstances surrounding Ms. Sauvé and Mr. Gilmour’s move. “The playfulness of net is what my husband first liked about the house,” Ms. Sauvé says, noting that a couple years on, he is now “fully recovered” from his stroke.

The success of the reconfigured atrium is particularly evident in the fireside reading area by the dining room. It’s in the middle of the floorplate, on the lowest level, beneath a two storey built-in bookcase (accessible by a tall, roving ladder). Because of its location, it should be the darkest spot in the house, yet it’s as sunny as anywhere else. 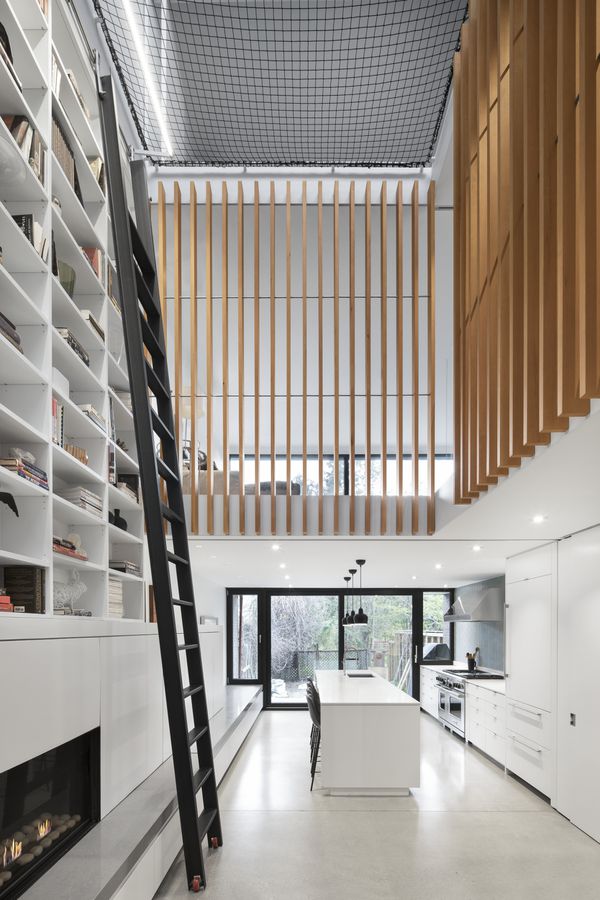 The fireside reading area is brightened by the skylight, thanks to the creative renovation.Adrien Williams

Although Ms. Sauvé and Mr. Gilmour weren’t clients of Mr. Curtis, the three have since become friendly. “The realtor who sold Maryse the house also sold me my house,” Mr. Curtis explains. “The realtor put us in touch to ensure the net gets maintained properly. That was the original impetus. But Maryse has been so nice and so pleasant, allowing us to photograph the project with furniture, which we could do earlier because of the divorce.”

“Andrew is very talented,” Ms. Sauvé says. “He didn’t create the home for us, but he made something we plan on living in for a long time to come. No flipping. This is it for quite a while.”

Your house is your most valuable asset. We have a weekly Real Estate newsletter to help you stay on top of news on the housing market, mortgages, the latest closings and more. Sign up today.